Takes fish at Barbarian Village and banks them at Edgeville Bank.
No requirements.

You can start the script anywhere, script will bank all items in inventory when inventory is full. If you have issues please let me know.

Want more gp/h? Message me and we can boost your speeds. 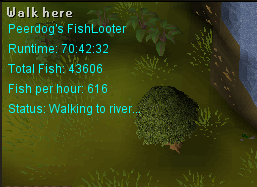 You can find the script here.

Nice release! I’m sure people will love this script, it’s a solid no requirements money maker, great for new accounts.

@Constellation Thanks! I’ll try to make it even better

@peerdog Great script, it’s simplistic and easy to use, but What’s stopping you from making this a bit more than just start and stop script? So much potential can be added into this, such as ability of making custom world-hoping menu, placing an exceptions list, like what if you’d rather have the bot pick up salmon over trout, etc. I honestly like the simplistic form tho, very well done :3

@Levia Thank you for the feedback! I’m improving it as I learn more so in the following weeks it should have all those things you just listed

added a simple GUI on start for me to build more later on.
optimized code again

0.06 is a fix for checking that the fish are on the right side of the river.

Thanks! I had fun learning and scripting this one so thank you all for your kind comments

@peerdog Gets stuck after hopping “walking to river” when it’s already there. Also if you could make it pick up cooked salmon, would be great

Thanks, I’ll fix these when I can.

Props to you for adding the cooked food. Using this script and it’s working pretty good.

Props to you for adding the cooked food. Using this script and it’s working pretty good.

I keep tweaking when I find time and if any errors show up.

Nice script! Ran for 1h on 2 accounts and went flawless.

This was the first script I pulled from the repository when I started a month ago. I just want to thank you, Peerdog. You’ve probably put about 15m in my bank over this past month.

This script works perfect for what its intention is coded for. I dont know if you plan on touching this script ever again now that its been released, however I just thought that since I’ve had so much experience with your particular bot, that I would give you a quick lowdown on how it runs.

Note: I average a lifespan of 3 days on every suicide account I run before they get banned.
[Positives]
-when babysat while I train my actual RS account, the script will run flawless.
-you can start this script anywhere and it will find barb village fly spot.
-a legit child could figure out the GUI, like 11 year old me would be in heaven.
-this script has coding to pick up cooked fish (cooked trout GP > raw trout GP)

[Negatives]
-Unknown error while banking, occasionally it will sit at the bank with a full inv.
(note: I only pick up raw salmon, and play with game manipulation enabled)
-Worldhop has never once engaged for me when other bots were flooding my current world/fish per hr rates dropped.
-When I manually switch worlds while the bot is running, the script frantically looks for fish on the ground, but when the fish finally appear it just still frantically searches one area just northwest of the tree people use for fires and never actually picks anything else up. [I suggest waiting for fish to appear before running the bot/hopping worlds]
-From time to time, the script will run to the spot to pick up fish, but never pick them up.

^all of these problems can be solved if you babysit^

Overall, great script. Once again, thank you for the release.

I’m glad you enjoyed the script, I have fixed all of these issues but I haven’t uploaded the updated version to the SDN yet. There were multiple issues with logging out and world hopping, all are fixed when I release 0.09.

Also, World Hopping will only occur when the world is dry for 2 minutes.

Also thank you for the kind words, means a lot to me