Banned a couple days ago - Finally

Hi all, I am making this separate thread to provide more information than I normally would in the thread made for posting bans. I will also post in that thread after this.

Firstly I gotta give massive credit to the developers and script writers, as this is by far the best bot I’ve ever used!

After about a years break from the game, me and a friend decided to start playing ironman. And ofc, ironman is tedious so we decided to start botting it shortly after. We both had already made accounts, his was about 800 total and mine 1400 total.
He used osbot and got banned within 2 weeks.
I used osbot the first week or so but switched to rspeer and never looked back.

I’ve botted everyday for 2 months straight and this week I finally got banned. I am now 1800+ total lvl with 50m+ experience botted!

I was mainly running RC zulrah and barrows the week before I got banned. And although its impossible to say what script got me banned, I do suspect it might have been epic fisher. I started at pisc bank (doing monkfish) assuming the bot would work. I really had to use the toilet so i just started the bot and ran to the toilet. When I came back it turns out my character had just been running around in circles the whole time

ive had 3 instances where i fall asleep and forgot to pull out the charger to my laptop, causing 8 hr bot seshs. This happened mainly over 1 month ago tho.

It just goes to show that botting is still very much possible, thanks again for an amazing botting experience!

Thanks for the share! You used all these scripts on your Iron man or did you switch to a regular account?

This is the account I have managed to create using rspeer, truly unbelievable. 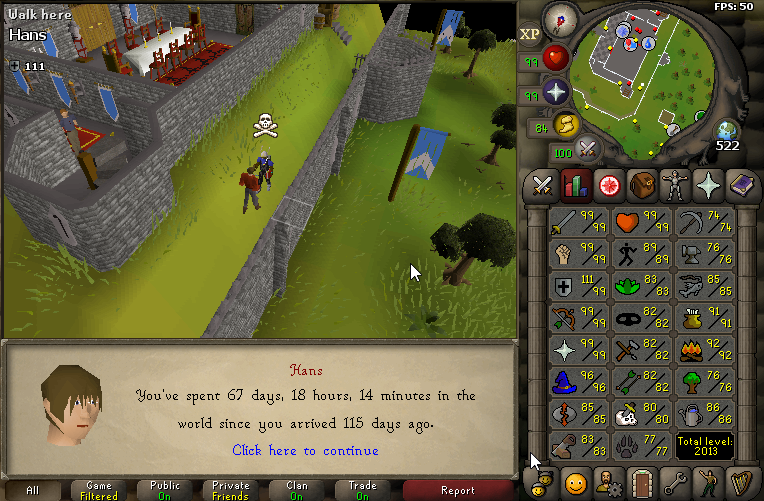 @David said in Banned a couple days ago - Finally.:

Thanks for the share! You used all these scripts on your Iron man or did you switch to a regular account?

All scripts have been used on the same ironman. Only botted that one account.

@Gulp if your smart about your botting you could get terribly high levels, this bot is the closest thing to fud it’s simply amazing.

@Vik said in Banned a couple days ago - Finally.:

@Gulp if your smart about your botting you could get terribly high levels, this bot is the closest thing to fud it’s simply amazing.

Hasn’t been my experience so far. Maybe I picked the wrong scripts

I think I’ll stick to my own stuff for now.

How many hours a day did you bot? I had an account I was botting like 16 hours a day and it didn’t get banned fresh out of suicide island for two weeks. Made like 20m off it lmao

@tehventus hi sorry for late reply, Im not 100% sure but I think i might have been averaging 5-6 hours/day